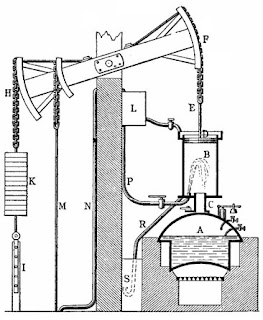 From the beloved Q & A Section of HubPages, I recently asked the question: "In your opinion, which alternative energy source is the most efficient?" ...Although I was hoping to get more answers, preferably ones that related to some of the more experimental or hypothetical sources of energy, many types were still brought up. In fact, although nobody mentioned it on that page besides me, it inspired me to write yet another web page (the other one is on another blog of mine) about Zero Point Energy.
Anyway, that's a totally different subject nonetheless...

Hydropower (water power) is well known for being a great energy source, so I decided to dig a little deeper and check out the history of steam power to pick up a few more tidbits about the use of water vapor, and so on, since all of these relate to water and power. But just so you know, I do realize that there is a big difference between "steam power" and "hydropower." Hydropower or water power is power derived from the energy of falling water and running water, which may be harnessed for useful purposes. Since ancient times, hydropower has been used for irrigation and the operation of various mechanical devices, such as watermills, sawmills, textile mills, dock cranes, domestic lifts, power houses and paint making. Since the early 20th century, the term is used almost exclusively in conjunction with the modern development of hydro-electric power, which allowed use of distant energy sources. But regardless of the differences, I feel that I can mention water vapor, steam power, hydropower and hydro-electric power, all in the same post; ha!

Although the power of steam was not harnessed until the 17th century, scientists had understood its potential for hundreds of years. Yes, no matter what many of you may think, people from long ago were not all ignorant apes and yes, we can't blame all of our technological advancements on the space monkeys, also known as "aliens." Where was I? Oh... Way back from 1st century, the Greek scientist Hero of Alexandria had discussed a device, the aeolipile, that shown the possibilities of water vapor. The aeolipile worked by heating water in a mounted sphere that had two bent nozzles. When steam was released through the nozzles, the sphere would rotate. Although it had no practical use at the time, this was the first indication of experiments with steam power. From this point, you should obviously realize just how compound-knowledge works when it comes to inventions: always building and correcting and getting better, etc. ...Although there are many times today, I often think that certain types of technology is moving backwards or making some people even more stupid, but once again, that's a totally different subject, so lets move forward...

When it come to the efficient use of water vapor, steam power had more dramatic developments in the 17th century, when the first boiler was invented. This sucker was little more than a pressure cooker, but from that point in history, a steady flow of innovations followed. Oh, if you are wondering about the boiler thingy, it was in 1679 when French inventor Denis Papin designed a device that could convert liquid to vapor.

From there, scientists began to realize that water vapor and/or steam could also be used to power engines. As depicted above, Thomas Newcomen had invented a steam engine in 1712, but it was the improvements made by James Watt that made the device more efficient. Watt's key innovation consisted of condensing steam, so that the engine did not need to heat and cool the cylinder. ...Stumbling on just a bit from there, steam power was, of course, being used to power fuel ships, locomotives, etc.

By the 19th century, this useful thing we call water vapor was being used to produce electricity and is still used today. The 20th century really amped it up a bit, as geothermal power stations, steam turbines, and nuclear power entered the scene.

Going back into history, and for a few additional tidbits (reference note: Timelines of History, The Story of Steam Power), in 1769-70, the steam car arrives. From France, Nicholas Cugot invents a road vehicle that can run on steam. Now, how fast this thing could go, I don't know. I doubt if it would have won many car races of today, but that's just a guess; ha!

This next tidbit is interesting... In 1819, The US vessel Savannah becomes the first ship to cross the Atlantic using steam power along with sails. The era of using sails, ends soon after.

In addition to developing the world's first steam railroad locomotive, the English engineer Richard Trevithick also adapted his high-pressure engine for use in iron mills and steam-powered barges.

I suppose I could write more about this subject and perhaps dig up a few more facts and interesting tidbits, but the point is made. Although I won't say that Hydropower is the most efficient power source known to man, especially since I think many great inventions have been suppressed in the past that used means that were not accepted by the greedy, one thing is for sure: we live on a water planet, so why not use it to the fullest!

Image of a Steam/Thermal Power Station: 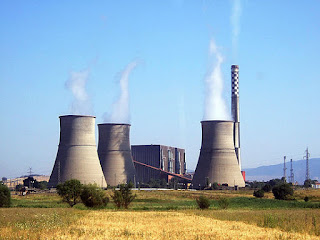 [A steam/thermal power station uses heat energy generated from burning coal to produce electrical energy. This type of power station is widely used around the world.]

In addition to this, you may also want to research the history of cooling towers, while we're on this H2O subject. Cooling towers originated out of the development in the 19th century of condensers for use with the steam engine. Condensers use relatively cool water by way of various means, to condense the steam coming out of the pistons or turbines. This reduces the back pressure, which in turn reduces the steam consumption, and thus the fuel consumption, while at the same time increasing power and recycling boiler-water. To read more about this along with many other aspects of this particular water & steam technology, visit: http://en.wikipedia.org/wiki/Cooling_tower 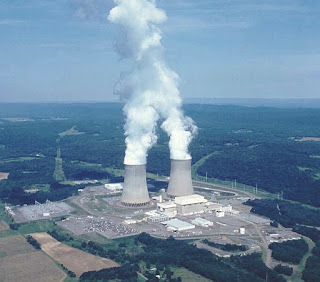 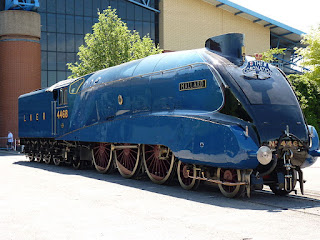 Additional Tidbit related to Steam Power:
Mallard (the steam locomotive shown above) is the holder of the world speed record for steam locomotives at 125.88 mph. Wow! That is pretty fast for a train, eh? The record was achieved on July 3rd, 1938 on the slight downward grade of Stoke Bank south of Grantham on the East Coast Main Line. It broke the German 002's 1936 record of 124.5 mph. Well, I thought it would be a good idea to add an additional tidbit to this sluggish post, you know, to combat some of the boring subjects that were discussed prior to this; ha-ha!

---End of Post "Water Vapor: The History of Steam Power"

Semi-related Link: Do they make bicycle-based generators?
Posted by Obscurely Diverse at 5:02 PM