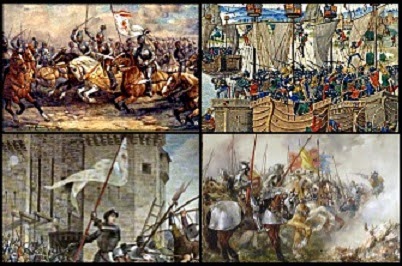 I'm not really a big history buff or anything, although I do like ancient history fairly well, but I was recently reading about a series of ongoing conflicts from the years 1337 to 1453 that is called "The Hundred Years' War." It was between France and England (each of their allies were also included). When categorized by historians as being one long continuous war, it makes The Hundreds' Year War the longest military conflict in history. Personally, I like to look at the entire existence of humans as one long war, but that's another subject entirely; ha!

Anyway, at the time, France was the most powerful nation in Europe and there shouldn't have been much of a match/contest, but the English actually surprised them with some new war tactics and weapons during this long course of battle. The 100+ year war seen a good bit of military evolution, to say the least, as not only did the militaristic tactics evolve, the weapons, army types, and even the concept of war itself changed during the process. A good example of such, is that before this war ever started, the heavy cavalry was considered the most powerful unit. Well, thanks to the longbow, this belief quickly diminished. Yeah, the longbow has a decent range and packs a lot of impact. It is actually one of the few weapons I don't have any experience with, but we make more advanced bows nowadays, so it is neither here nor there, as I'm rambling now... Later on, they had an even better advancement take place during this war, when the firearms entered the scene. Pow-pow!

Extremely long wars like The Hundred Years' War is bound to teach a lot of lessons. You know both sides of this war were drained in the resource department! I hope the new name they created for each nation at the end of all of this was worth all the effort along with the numerous casualties that were involved.

Side Note: When it comes to war history and/or what was the longest military battle of all time, there is some debate. Some folks may say the Arauco War was the longest, but it depends on how you credit the moments of peace in between the conflicts, I suppose. Most people still credit The Hundred Years' War as the longest, though.

If you'd like to read more about this glorious battle, Wikipedia has an elaborate page that covers this subject quite nicely, here: en.wikipedia.org/wiki/Hundred_Years%27_War

If you'd rather read about the military history of France, go here: en.wikipedia.org/wiki/Military_history_of_France

Image Credit: It is in the public domain because its copyright has expired.