This lengthy post will contain 5 separate blog-style posts that I recently removed from another community website. Don't take it the wrong way, though; I'm far from a Grammar Nazi, to say the least! However, there are some occasional English laws that I feel either need to be fractured or, in some cases, strictly obeyed. At any rate, when writing poppycock for pennies online, the main objective is to convey your thoughts, ideas, opinions, and information. Regardless of how trivial this "article" is, I felt the need to plaster this lighthearted verbiage somewhere, so here we are. Each individual post will be entitled the way it was originally written over at the failing site known as "Bubblews." [A micro-blogging site that doesn't exist anymore]

Why can't people be more succinct, terse or concise? 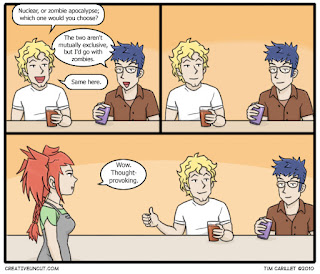 Yes, I realize that the primary words in my title are all synonymous to each other, but that is not the point. LOL! But seriously, how many people out there get annoyed by the ones that take 10 paragraphs to say what you could easily say in one or two sentences? I'm sure we have all met these type of people before, but I am curious about how many people are bothered by this besides me. I don't have many pet peeves, as they say, but this is one of mine.
When somebody runs to town, for example, and tells me what all has happened to them on their journey or whatever (when they get back), I really detest the idea of me having to listen to 3,000 words when at the end of all the inane chatter, I'll say something like: "Yeah, so the restaurant was crowded and the cashier got confused and gave you the wrong order because not many people order take-out during rush-hour; gottcha!"

For yet another out of the millions of examples, I once worked with a person that would always "have a story" to tell. Well, here would be his typical introductory convo piece: "Okay, hey. Yo! You guys got to hear this. Well, it goes something like this. Alright, this is kinda the way it happened. Yep, here it goes. Now, it started something like this... Oh, but make sure you listen to everything closely. Okay, I'll start with the main part first..." Yikes! Is there a button I can hit that represents pulling your hair out!? I mean, it is like "get the shit out of your mouth and lets get on with it already!"

This topic is so vast, I'm ending it right here or else my point will no longer be succinct, terse or concise! LOL!

---End of Post "Why can't people be more succinct, terse or concise?"


The 'Comma Splice' is Overrated

I stumbled across this subject tonight, while reading a post that involved somebody chattering about people confusing certain words with others, etc. The post was amusing in a bad way, since it had its own typographical issues and whatnot. Personally, I don't care about strict grammatical laws in the slightest, except when they are being spewed out by people that need to be paying more attention to their own writing and lack of creativity, etc. When it comes to English laws, I break them all the time - on purpose. Anybody that knows anything about this current form of English, realizes that it isn't stagnant nor held hostage by wanna-be grammar Nazis and so forth. Anyway, another silly subject arose tonight and it was about the beloved comma splices.

Their standard bible quote for the comma splice rule is: If you have a main clause (something that can stand alone as a sentence) and you put a comma after it, what comes after that comma should not also be able to stand alone as its own sentence. Personally, I think it depends on the shortness of the clause and how well it goes together. In my opinion, it is a combination of a style-choice along with some basic common sense. Thankfully, I'm not alone here. The page I'm about to link to, used this as one of the sub-headings: "The Exceptions Are Enough to Drive You Crazy." LOL!

Here's an example of the type of overrated crap these so-called "grammar gurus" argue about: "It’s not a comet, it’s a meteor." Wow! What's the big deal? I think that sentence looks totally fine to me.
Here's another popular example: "Man proposes, God disposes." Once again, in my opinion, that sentence looks good to me!

The 'comma splice' fanatics think you should type multiple 1 or 2-word sentences all over your page, evidently. You know, stuff like this: "Hey. I came. I saw. I conquered. Save money. Live better." LOL! Does that not look retarded or what? Yeah, but there is no comma splice involved, ya know? Ha!

Anyway, if you'd like to read a fairly elaborate page about this, go here:
www.quickanddirtytips.com/education/grammar/how-avoid-common-comma-error-comma-splice?page=all 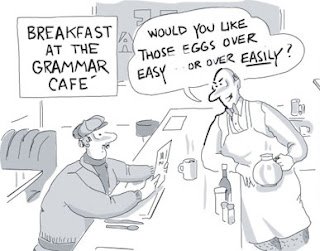 Beside or besides the point?

I rarely think of asinine things like grammar laws, but when I do, I realize even more why I don't normally think about asinine grammar laws. LOL! Anyway, on my last post, I used the phrase "besides the point," but a few minutes later, I wondered how many wanna-be grammatical gurus would tell me that it should be "beside the point." Thankfully, I haven't had this debate yet, so I thought I'd start one here; ha!

I mean, when I first hear this phrase it totally sounds correct to say "beside the point," but my gut instinct tells me that it should be "besides the point," so therefore that is the way I roll...
Going by the dictionary, I was correct by saying 'besides' instead of 'beside' albeit I couldn't care less in real life about any of this mess. However, since everything is online here, I feel that it matters somehow or to at least someone out there, whether they think they have a one-up in linguistics or not. I'm not an English professional and I do good to type a coherent statement or string a few sentences together to form those daunting paragraphs that are filled with poppycock, at times. In real life, I specialize in slang and profanity and, for whatever reason, I seem to remain proud of those very same primitive facts that help keep me in my utmost pristine-like caveman condition. : )

At any rate, I'm online right now and I'm going to pretend to be smart. I would really like to know the correct fundamentals here, though. The term 'beside' is referring to a location and the term 'besides' can act as a preposition and means 'other than' or 'together with' or 'in addition to' and so on. Yes! That's what I mean when I say "besides the point." Why people argue over this silly stuff, still amazes me today!

You will rarely catch me talking about stupid grammar laws and whatnot, as I believe in the freedom of style and the 'artistic license' concepts, and so on. However, this 'atleast' stuff really gets on my nerves. I've seen many people over the years continuously use this crazed word as if it's some type of accepted diction. Is it?

The words 'at least' does represent two separate terms, and there is no reason to purposely type the doltish, imbecilic word 'atleast'. The least I can do is upload this asinine post into the world wide web while hoping that the very least it accomplishes (outside of making me a few nickels), is help at least one person tonight realize this simple actuality. Ha-ha!

I wonder what is causing this? Is it the fact that the word 'alright' and the words 'all right' are alright to use?
The same thing applies to the words 'a lot' since it's not 'alot'... You see what I mean?

In summary: I hope that you never use the feign word 'atleast' or 'alot' because at least you can't say that I didn't tell you a lot within this post. Is that alright? LOL!

It is correct to use 'Literally' when it is not 'Literal'?

I really dislike typing about English lessons and whatnot, especially since I'm not an admitted guru of such things. However, over the last few months, I have seen several self-professed grammatical gurus falsely hammer down on some people for supposedly using the word 'literally' incorrectly. Tonight, I seen another person post about this, although she wasn't being arrogant like the ones I seen in the past. At any English-based rate, they are wrong for trying to correct these people.

Yeah, it is always funny when somebody writes a post about correcting others, when they are actually the ones that are wrong. Ha-ha! I will briefly explain, with factual evidence (it is called a dictionary, in case you didn't know), why it is correct to use the term 'literally' when it is not a literal situation.

Merriam-Webster doesn't lie, and it can be your friend, if you let it. There are two primary definitions for the adverb known as literally: 1) Actually 2) Virtually
Now, the adjective 'literal' has three definitions albeit only one relates to something meaning 'actual' like it is some type of a matter-of-fact diction. Instead of filling this post up with senseless definitions, let's go back to the term in question, which is the word 'literally'...

Okay, the first definition is what, evidently, some people think it can only mean. However, the 2nd definition states that literally can also mean virtually. Let's break it down, shall we? Virtually can mean: 1) almost entirely : nearly 2) for all practical purposes
Even the example this definition gave in my dictionary was "literally poured out new ideas." You know, as in the ideas were not literally pouring out actually, but for all practical purposes, they were virtually pouring out. So as you can see, it is not incorrect to use the word 'literally' when it is not a 'literal' situation. Duh! I hope this post helped at least one person out there that is under fire for supposedly using the word 'literally' incorrectly when they are, in fact, actually correct. LOL!

Well, I hope some of y'all enjoyed my minuscule online collection of 5 little blog posts that were under the English Lessons / Grammar Laws genre. Hopefully, I won't have to write any more trivial poppycock within this particular niche anymore, though, but it was fun to try something different for a whole minute; cheers!

Out of the 5 English Lessons posted above, which one do you feel the strongest about?