Wild Game: Have you ever tried eating Kangaroo Meat? 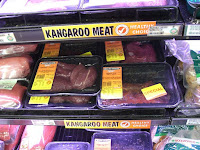 Originally, I was going to place this query within the Q & A section @ HubPages (I no longer publish there anymore), but when my question went over the seemingly ridiculous restricted word limit, I thought I would make a quick post about it, instead. So, the reason why this page isn't packed with lots of awesome info and the word count isn't high, is because this is more of a Q & A style post, although I'll try to make it a bit more. In a thumbnail, I'd like your input about wild game, why or if you think it is healthier, which is your favorite and, most of all, what do you think about eating Kangaroo meat... You can share some odd recipes or some freaky marinade secrets for all I care, as there are certain cultures out there that can make many meats that you'd think weren't edible, taste good - well, so I hear, anyway.
Quick reminder: I'm not eating snake or any other type of reptile, so please spare me from the reptilian tidbits; ha!

Anyway, I've thought for many years how wild game is so much more healthier for you, even before the majority of the public became abundantly aware of all the chemicals, hormones, etc., that is being pumped into the common meats found at local supermarkets. When it comes to wild game, though, I've only ate rabbit, squirrel and deer on rare occasions. On the other hand, I've ate many wild-caught fish, but I don't think that relates to this particular subject. Even though I think wild game is healthier, I fall for convenience and usually buy lean cuts of beef, chicken and pork from the local grocery store. On a side note, I have bought local farm-raised cow before and steer clear from certain "fresh" meats that are injected with chemicals and never seem to ruin, and I also try to avoid sodium-nitrite laced processed meats, as much as possible.

At any rate, what made me think about eating Kangaroo meat, although I've never tried it, was Australia. I was thinking of all the possible cool places to live on this planet, and when Australia came to mind I couldn't help but think of hot weather and Kangaroo burgers. The area sounds nice, lots of wildlife, scenery, etc., but I like my cold, cheap American beer and rib-eye steak, boneless pork chops, chicken leg quarters, and so on. With that thought in mind, I thought I'd ask this question in case somebody has some pointers on how to cook this stuff and/or how it tastes compared to beef, deer, etc., in the event that I ever get in the mood to try several exotic meats, not that the Australians think Kangaroo meat is exotic or anything; ha! I figure that it probably tastes like deer, sort of tough, and needs a good marinade like Worcestershire sauce or something.

I recently read that Kangaroo meat is exported to over 55 countries worldwide. Wow! Those wild suckers really hop around!

Both the meat and the hides are sold from this type of meaty marsupial, although most species of macropod are protected from game hunting by law (except a small number of the overly populated, larger-sized species). Of course, this doesn't make some of the animal rights activists very happy, to say the least. But then again, there's support from a broad range of professional ecologists in Australia - groups such as the Ecological Society of Australia, for example. Per Wikipedia: "Such groups argue that basing agricultural production systems on native animals rather than introduced livestock like sheep (bah-ha-ha) offers considerable ecological advantages to the fragile Australian rangelands and could save greenhouse gas emissions."

So, now that we got that out of the way, what else do those Australians eat for wild game meat? ... Holy cow! I just stumbled upon a Bandicoot Soup recipe while searching online! If you're wondering, a bandicoot is a small Australian marsupial that looks like a rat, kangaroo and opossum - all wrapped into one mini rodent-looking creature. Dang, I guess some people really will eat anything if cooked properly. Well, I think I'll hold on the soup recipe...

Now, lets go back to the Kangaroo... I just checked on the web while using the keywords "how to cook Kangaroo meat" and it appears that I assumed right, in that the meat would be tough if not cooked properly due to it being extra lean, and generally most cuts would need a good soak in a tasty marinade beforehand to help tenderize and add flavor. I keep reading about how it should be cooked quickly and not to exceed medium-rare for most cuts, blah, blah. Okay, I just learned that "Kanga Banga" is kangaroo sausage. Hmm, I wonder if they add pork fat to that? I know when I was a butcher, I'd add pork fat to deer meat so I could make deer sausage, and I'd add beef fat to deer meat so I could make deer burgers, and so on.

Additional Resources for the post "Wild Game: Have you ever tried eating Kangaroo Meat?"

Related Links:
...Smoked kangaroo fillet, Kangaroo Fritz, Kangaroo mettwurst, Kangaroo pepperoni, Kangaroo kabana, uh, okay, that's enough reading on Kangaroo cuisines. If you'd like to find a cooking guide for such things, visit: Wild Oz (link has been deactivated).
Although he lost me with all the stuff he cooked with it, If you'd like to check out this guy's kangaroo roast dinner, go here: http://sixthseal.com/2013/04/how-to-cook-kangaroo-meat-a-kangaroo-roast-dinner/
* How to Cook Kangaroo Meat [link is no longer valid]
Well, there you have it; cheers! 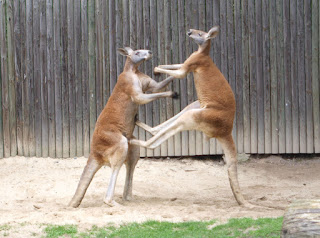 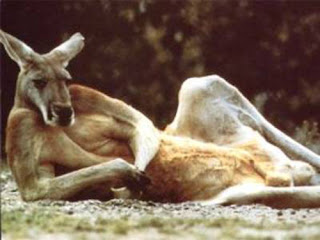 ---End of Post "Wild Game: Have you ever tried eating Kangaroo Meat?"
Posted by Obscurely Diverse at 5:41 PM