Scrapple from Pork Scraps and Trimmings 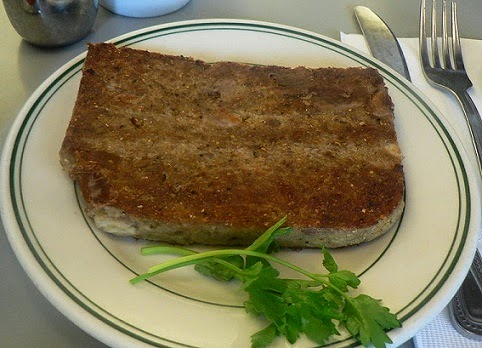 While browsing through the food section on another website the other day, I stumbled upon a chunk of what appeared to be an unidentified meat-like substance. They called it "scrapple," but the name itself still didn't clear up the mystery of its origin nor did it state that it was or wasn't made out of dog meat; ha-ha! Anyway, not that it looked very appealing, I was a little bit interested in finding out what this "entree" was.

Well, come to find out it is made from pork trimmings and scraps. The scrapple is basically a mishmash of pork scraps combined with spices, cornmeal and flour. This mushy block of trimmings, breading, and seasoning is then formed into a loaf of some sorts. It is not a very solid loaf of meat or whatever, but it is together enough to be sliced and fried.

Now, when I say trimmings and pork scraps, I'm not talking about premium cuts here! Scrapple is typically made from hog heads, livers, hearts, and other miscellaneous parts that you normally wouldn't want to eat; yikes! Anyway, I've read enough about this crap today. If you would like to learn more, go here: en.wikipedia.org/wiki/Scrapple

It was entertaining to read other people on the Internet trying to describe Scrapple. For example, one person was like: "It is a bunch of pig junk with brains and stuff all mixed together to form a less solid Spam." LOL! Hey, I've got an even better description of Scrapple that I found online... The person basically said that Scrapple is all the crap that wasn't good enough to make it into the hot dogs, bologna, cat food, and dog food. Yeah, I'm real hungry now; thanks!

---End of Post "Scrapple from Pork Scraps and Trimmings"
Posted by Obscurely Diverse at 4:31 PM