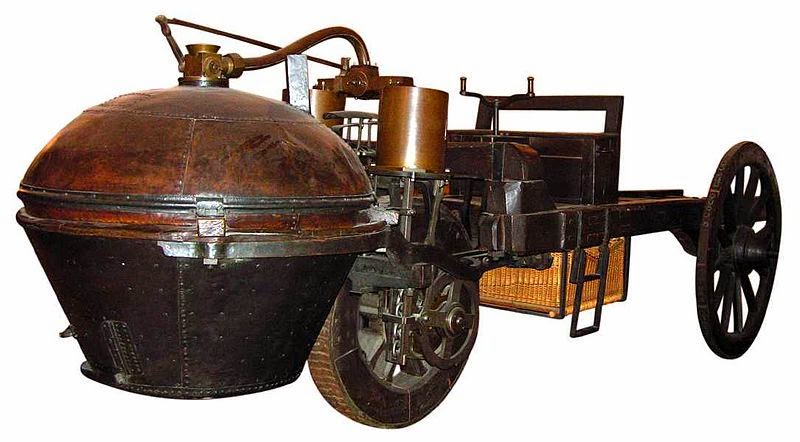 Well, the question concerning who created or designed the first automobile is a bit complicated and debatable. Many people and/or historians disagree. With there being an estimated 100,000 patents that lead to the automobiles as we know them to be, many argue over what represents the first "true" automobile.

To simplify the matter, we won't even consider Leonardo da Vinci's self-propelled wagon in the 15th century, albeit this contraption was way ahead of its time. However, if we do credit the first steam-powered vehicle, as shown above, then it goes to the French engineer Nicolas Cugnot. It was built in 1769 and it could reach blazing speeds of slightly over 2 mph. LOL! Hey, that is still speed of some sort and it was definitely a break-through for its time period. Anyway, it was a 3-wheeled vehicle that was used to haul artillery and could hold 4 passengers for a short ride-time of 15 minutes before having to rest during the "powering back up" process.

Yeah, with that being said, one could easily understand why many folks did not considered it to be the first true automobile. Several years later, in 1804/1805, Oliver Evans claimed to have built the first self-powered amphibious vehicle (one that could go on land and in water), but the evidence was poor and no technical drawings of the device survived. Oliver's own descriptions seemed exaggerated and contradictory along with the motor being too weak to do what he claimed this vehicle could do.

This is why some historians just credit the Germans Karl Benz and Gottlieb Daimler for building the first practical cars with internal-combustion engines, back in 1885. Improvements quickly followed from there, and now we have gas-guzzlers everywhere; ha!

---End of Post "The first true automobile?"
Posted by Obscurely Diverse at 12:25 PM