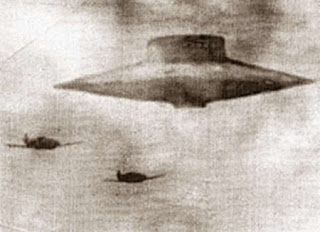 I've wrote about this before on one of my own websites in great detail; well, not really too elaborate but it was probably like a thousand words or more. Anyway, this is a pretty cool subject for the ones that know their history and also like to mix a little bit of alien stuff and conspiracy theories into the mix. The primary reason for this post, is to mention the book entitled "Hitler’s Suppressed and Still-Secret Weapons, Science and Technology."

I enjoyed that book very much when I read it a while back (which is saying a lot, considering that I rarely read anything informative outside of my current UFO dock station), as it was nice to go over some of the basics about how there was definitely a lot of technology achieved from the German scientists of that particular time era. It was also a nice reminder of how much was lost, from that war. Yeah, of course there were lots of lives lost, but I'm talking about the technology, right now. During times of war people have to act fast, and back then that meant the scientists were very busy with coming up with advanced technologies that would help them triumph in their goals of global domination or whatever.

Many rumors involved extraterrestrial help and Hitler is well known for studying the occult along with anything involving supernatural, extraterrestrial, and mystic possibilities - you name it! I mean, was there actually super-metals, laser weapons and cold bombs in 1944? That books definitely covers a lot of subjects, although some of them were rather lame and unnecessary for today's time, of course. Time travel was also an experiment in the making by these people, but, like with many things, it got cut short during their defeat. They may have failed miserably at time travel anyway (only the cool people can utilize time travel), but just search online for the "Nazi Bell Project - Time Travel Experiments" for more info. At any rate, Hitler stalled, for some reason, and that cost him the war - going by rough estimates. I'm not pro-Nazi or anything, I'm just talking about the lost technology. Many of you have no clue how many technological advancements occurred from that time period and the German scientists ended up leaking a lot of stuff to us, after the war. Well, the ones that didn't die during the process, of course...

Believe it or not, Hitler was also curious about the "Hollow Earth Theory," as well, which is probably why it was thought by some, that he had secret underground bunkers in Antarctica. If you are not aware of this outlandish notion, the Hollow Earth Theory involves entering the Earth at the poles (totally different subject, there) and it basically equates to a world inside of a world, without going into detail. I've wrote about that, too, but I'm not sure about what works on this site, albeit I'm still testing the waters here. Anyway, I may chatter about some of this later.