Was Bob Lazar one of the greatest UFO frauds? 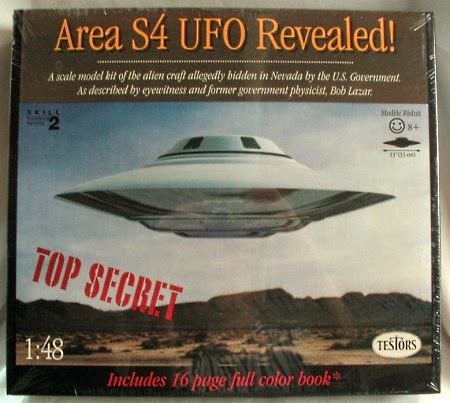 This guy could have possibly been one of the best and/or greatest UFO frauds for his time, in my opinion. I think I first heard about him when I was a young kid, while watching the show Unsolved Mysteries. Anyway, this character always had a calm disposition and seemed somewhat believable to the common public. In fact, I wanted to totally believe him but a lot of things just didn't seem to add up. For one, if he was really threatened by the "top-secret people" when he originally started telling a few others, the guy wouldn't have his face plastered all over the place, for starters. Now, several years later, you can find many YouTube videos of him giving more speeches about this UFO subject, and he is currently still alive and well, by what I have read. It also doesn't make sense that he can't prove that anybody knows him from the University he supposedly got his PhD from, and so on.

Ha! I still remember buying the UFO model kit several years ago that was inspired by his so-called knowledge of the flying saucer designs, which I have depicted here, for this post. Anyway...

Bob Lazar claimed to have worked in 1988 and 1989 as a physicist at S4, that is allegedly located at Papoose Lake southwest of the top-secret Area 51, which is near Groom Dry Lake, Nevada. According to Bob Lazar, S4 serves as a hidden military location for the study and research of extraterrestrial spacecraft using reverse engineering methods. I don't deny nor discredit any claims such as those, but was this really one of the guys involved or was he a complete fraud? B. Lazar says he saw 9 different flying saucers there that has previously been operated by ET Space Monkeys (more or less) and has provided detailed info about this subject along with bits & pieces of tidbits explaining some of the propulsion system features and other technical details of a disc-shaped vehicle he called the sport model.

If you are more interested about this topic, just go to YouTube and do a quick search for Bob Lazar.
If you need a quick summary, go here: en.wikipedia.org/wiki/Bob_Lazar
If you'd like to hear why some folks think he was one of the greatest UFO frauds, go here: www.alienscientist.com/boblazar.html

Image Credit: Is already provided in the link above.

---End of Post "Was Bob Lazar one of the greatest UFO frauds?"

Semi-related Blog Post:  http://perpendicularity.org/blog/2013/03/04/will-humans-ever-colonize-outer-space/
Posted by Obscurely Diverse at 10:10 AM