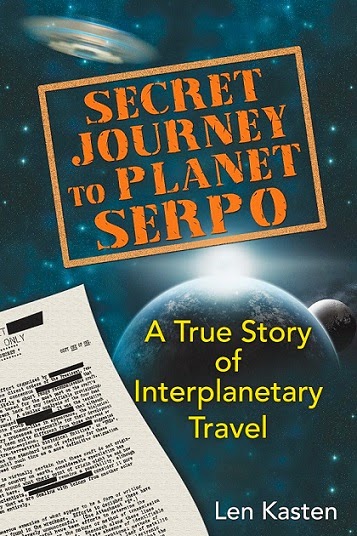 Now this is not a book you commonly see on the shelf! This suppose to be based on a true story, although some critics that were supposedly "in the know" actually said that the Serpo project did happen, but this book does include a lot of incorrect information. However, this amazing documentation has had awesome reviews thus far and it has been said before that no ufologist's library is complete without the "Secret Journey to Planet Serpo."

Without going into too much detail, this story involves a top-secret mission/U.S. government program that consisted of 12 people who traveled 39 light years away and landed on planet Serpo. They stayed there for 13 years. Some died during the mission, and some died years later, after they returned back to this planet. The last survivor died several years ago.

The content of this interplanetary travel book is based on the diary of the expedition's commander and the debriefing of the Serpo team. It describes the ongoing relationship the government has had with certain extraterrestrials, which they claim began way back in July 16, 1965 albeit many of us have heard of much earlier dates. I'm not sure what they mean by that date, unless that was the start of this particular mission/interplanetary movement. Instead of assuming that everything from this book is true, which is never a good assumption, it might be better to read a more honest assessment (3 page article) of this situation, found here: www.ufoconspiracy.com/reports/doty-rick-serpo.pdf

This 304-page book definitely sounds like an excellent read, nonetheless. I've seen the digital version as low as 10 bucks and the softcover book listed at 18 dollars. There suppose to be 3,000+ pages of information hidden somewhere, in which this 300+ page book stemmed from. Who knows what information is truly being withheld and who knows what vault those 3,000 pages of documents may be hiding in. Regardless of fact or fiction, this sounds like an awesome book that provides all the primary subjects an alien aficionado would want. Outside of the interplanetary travel and extraterrestrial communications, I have read from various sources that, strangely enough, the laws of physics doesn't quite work the same on planet Serpo as it does here in our Solar System, and that their (the aliens involved with this particular project) study of chemistry and physics is nothing like ours.


Shopping Link:  "The Secret Book of Interplanetary Travel via Amazon"

Image Credit: Fair Use - Book Cover - Amazon.com - This image can be found on various websites & catalogs.