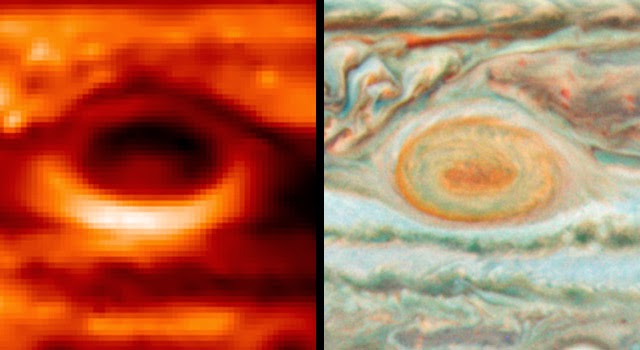 Have you ever heard of the expression 'when Hell freezes over'? Well, no other planetary place in our Solar System represents a hellish storm like Jupiter's Great Red Spot and despite the red spot's furious appearance, it averages a temperature of -160 Celsius! Wow!

Jupiter is, of course, the 5th planet in our star system and is the first of the gas planets. It is by far the largest planet, as you could combine the size of all the other planets in our Solar System and Jupiter would still be twice as big. 99% of Jupiter is made up of hydrogen and helium and it does have a rocky core about the size of Earth. Another cool factoid about Jupiter, is that it revolves on its axis super fast, and it has the shortest day in our Solar System.

Anyway, the Great Red Spot has confused astronomers since they first witnessed it, more than 300 years ago. It is an ongoing, massive storm and a crazy vortex that never seems to end. It defies what we know, and we really have no idea why this storm never dies. They say it should have stopped a long time ago, but it hasn't. While they are constantly trying to figure out why this frozen hell and tempestuously turbulent Red Spot never dies, we'll just go back to my previous notion of how Jupiter was somewhat close to becoming a star upon its birth, if it would have gained a bit more mass, as stated here:
http://random-twaddle.blogspot.com/2015/03/what-if-jupiter-would-have-turned-into.html

Image Credit: It is in the public domain because it was solely created by NASA.