Life Sequence of the Stars 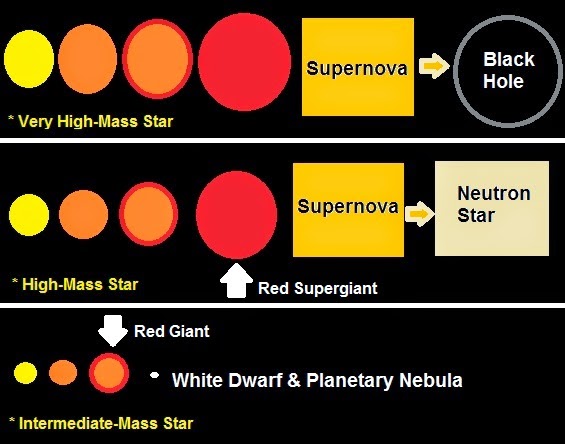 Well, this is a subject that really has no impact on our current lives, but yet some folks still like to know these things. When it comes to the life sequence of the stars, it really depends on the size of the glowing celestial body we are talking about. Unlike what some people may think, the larger stars actually have a more turbulent & shorter life when compared to a smaller, slower burning star like the one in our Solar System - in which we call the Sun.

Instead of giving some long, drawn-out science lesson, I'll cut to the chase and get right down to the pertinent matters at hand. The illustration I used for this post sums it up in a nutshell, although one must forgive the crudeness of my model because it comes via the MS Paint program; ha! Low-mass to intermediate-mass stars have a much longer life on the main sequence. They burn for a very long time (much longer than high-mass stars) before they turn into a red giant. From that particular end-stage (red giant) of their life, they simply end up turning into a situation involving what we'd call a planetary nebula and, without all the excess science, a white dwarf.

The high-mass stars turn into a red giant much quicker, then, due to their enormous mass, go into a stage called the red supergiant. This is where a supernova forms. The ones with this size, after becoming a supernova, ultimately turn into a neutron star. The stars that are even bigger than those, in which have a relatively gigantic amount of mass, go from a supernova into a black hole. Some people still claim that black holes don't exist, but let's not get ridiculous here.

After clicking the image to enlarge, you will see that I skipped all of the steps during the main sequence. Basically, it would show the same star being basically at the same size for a lengthy amount of time. Instead of wasting time trying to illustrate the differences between the main sequence from small stars to large, I figured that you would understand the fact that the bigger and hotter stars burn out much quicker than the smaller, cooler stars. It is the outcome/end result of the star in question, that is the most interesting, in my opinion.

I realize that after writing this little string of verbiage, that I probably should have elaborated about what a supernova is along with a neutron star, not to mention a black hole. LOL! I'm assuming that many of you couldn't care less about any of this, but I still may do a post about the other stuff, to fill in the blanks, later on. For the ones that already know about the various types of life sequences that are involved with stars of different sizes, you are merely stuck with my illustration to laugh at. Either way, thanks for reading...

Image Credit: My own photo.

---End of Post "Life Sequence of the Stars"
Posted by Obscurely Diverse at 4:44 PM