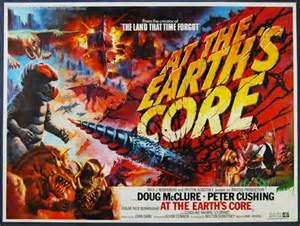 I was thinking earlier about something that I was once told by a conspiracy theory nut. The guy was obviously a proponent of the "Hollow Earth Theory" and whatnot, but he did bring up a valid point during his rant. First of all, if you have no idea what I'm talking about when I mention things like the "mysterious inner world" or the "hollow Earth theory," you may need to first read up about it, here: perpendicularity.org/blog/2012/07/10/hollow-earth-or-mysterious-inner-world/

It is somewhat of a fascinating subject to say the least, albeit the concept mostly thrives within the minds of sci-fi aficionados, uh, for the most part. At any feign rate of facts or fantastical notions of fictional storytelling, the concept still remains. The conspiracy nut mentioned that he found it to be very unusual that there were very few movies and books available to the public that surrounded the hollow earth/inner world theory because it wasn't allowed. Well, come to think of it, there really are very few movies that were made (for some strange reason) that related to a world inside of this planet. I don't know about the books, though, since I'm not really into reading fictional tales, etc.

Anyway, I do own one of the few movies that related to this. It was called "At The Earth's Core." I have read before that this particular film was intended as a loose adaptation of "Journey to the Center of the Earth," by Jules Verne, although that is neither here nor there. The movie (the one I'm talking about) involved several not-so-friendly creatures and a bunch of scantily clad prehistoric-looking people along with telepathic pterodactyls that inhabited the center of Earth, and much more. It was a colorful adventure for its time and I'd recommend it for any sci-fi buff that enjoys watching old films. If you know of any other cool books or movies that relate to this subject, feel free to share; cheers!

Shopping Link via Amazon: Click Here for the DVD "At the Earth's Core"

---End of Post "Movies related to the Hollow Earth Theory"
Posted by Obscurely Diverse at 4:35 PM