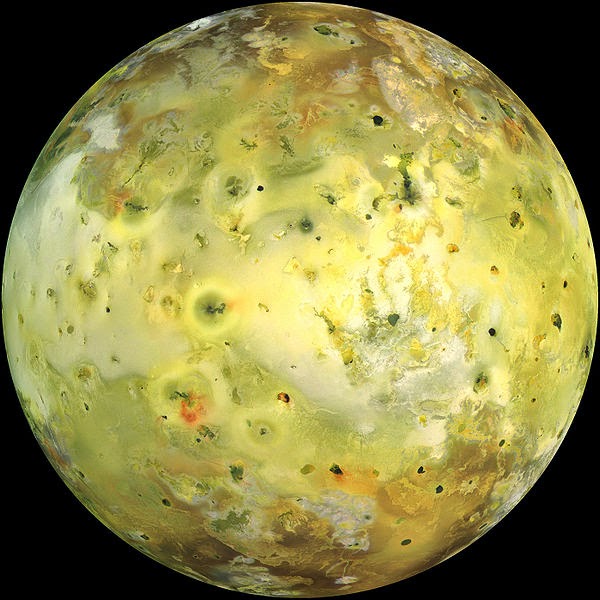 When I say "Io," I'm not talking about the character in Greek mythology, nor am I talking about its various roles in science fiction flicks and literature. I'm talking about the crazy volcanic moon of Jupiter. First of all, Jupiter has many moons. The last count I heard was 67 moons around Jupiter, but Io is in the group called the Galilean moons, which is the giant planet's 4 largest satellites/moons.

What makes Io different, is that it is the most geologically active object in the Solar System. It is one crazed, volcanic hell with over 400 active volcanoes in an area slightly bigger than our own Moon! Speaking of that, Io is the 4th largest moon in our solar system while our Moon is the 5th largest.

Why is Io so angry? Well, it spins around Jupiter really fast and, like our Moon, it has a locked orbit with the same side always facing the planet. Each trip Io takes around Jupiter, it is tormented by the tidal pull of Jupiter's extreme gravity. The surface of Io will bulge forward when close to Jupiter, then settle back down as it gets further away. This causes a lot of friction and great heat from the movement of Io's rock/metal interior structure. This, in turn, powers these insane volcanoes that spew wildly into the air on a regular basis. Would you like to visit Io? LOL!

Image Credit: Is in the Public Domain because it was solely created by NASA.