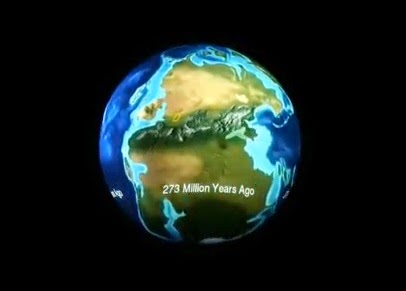 Well, I just wasted several minutes of my life watching a few YouTube videos while reading lots of comments during the process. Man probably never thought that they would ever live in a time period where certain people would gather together online and argue about the continental drift. How can anybody have conflicts and/or arguments about pieces of land bumping around and changing shape and location? Well, that one is simple. We will always have people out there that has supposedly "figured it all out." LOL!

I remember being in Kindergarten class while looking at a globe one day and thinking "those land thingies would almost fit together like a puzzle." Yeah, I was 5 years old! At any conflicting rate, new technology along with additional ideas (even a conspiracy theory made it into this subject) and whatnot, has turned some seemingly meaningless topic into a full-fledged debate that has soared to new heights.

The link I'm about to provide, is to a YouTube video that has nearly 50,000 comments! It is about a conspiracy theory/balloon theory that the earth is actually growing. They explain why Pangaea happened and portrays the planet as expanding into grounds no scientist dares to speak about. If you'd like to watch this mini-flick and to read the hilarious commentary, go here: www.youtube.com/watch?v=oJfBSc6e7QQ

The next video is called "Plate Tectonics in Action," and they tried to demonstrate the pre-Pangaea period (as if anybody was there; ha!) by using various types of modern technology. Their video ends up making the land look like a bunch of non-stop bumper cars on hot grease. You can find this video, here: www.youtube.com/watch?v=Cm5giPd5Uro

The next video I watched, tried to show how the Earth will look 100 million years from now. It is too stupid to link to, even for entertainment purposes. I'll just let you dream up any scenario you desire, as it will probably be more accurate than the video I just watched.

The point is: Uh, there is no point to any of this, which is the point. Humans have so many other things that are more important to argue about, and some of these continental drift aficionados may need to either get a life or perhaps find the location where their brain has possibly drifted to. LOL!

---End of Post "Conflicts with Continental Drift"
Posted by Obscurely Diverse at 7:45 PM