Did the Bees evolve with the flowers? 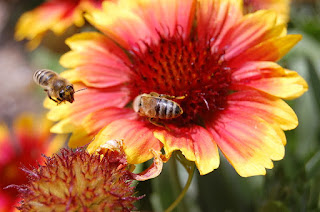 This is such a fun question! I especially enjoy the answers from the atheists that try to blame it on co-evolution and whatnot. I'm really curious about this subject, though, since everybody has a theory nowadays. Anyway, did the bees evolve at the same time as the flowers and plants that require pollination? If so, please explain this coincidence. Hell, your guess is as good as mine, right? While we are at it, please explain flying squirrels and beetles that damn-near blow fire from their bunghole, too. Well, don't stop there, either, as we got walking whales and all sorts of cool stuff to discuss after that, as well.

Personally, I'm so sick and tired of hearing about atheists and religionists that can't seem to ever get along. You got God or Gods on one side, and you got science magic and things that mysteriously go "bang" on the other side. It really gets old. What? Do most atheists believe in the Primordial Soup Theory, too? If you are interested in that subject, you can start with the hilarious history of it, here: www.trueorigin.org/abio.asp
Or, go to Wikipedia and have even more fun: en.wikipedia.org/wiki/Abiogenesis

I don't even know where to begin, as there are too many holes and laughable gobbledygook flying around, it is utterly ludicrous. By the way, in case you are unsure, I'm not an atheist nor am I involved with any organized religion. Good grief, I wonder if the Buddhist people argue over this crap. Uh, I doubt it... Anyway, if you can explain more about co-evolution and/or stuff like how the bees evolved simultaneously with the flowers, I'm all ears. Thanks!

Side Note:  I originally posted this query on another website.  The comment field on that site contained the following, in reverse order (so start at the bottom and work your way up):

---End of Post "Did the Bees evolve with the flowers?"
Posted by Obscurely Diverse at 4:49 PM