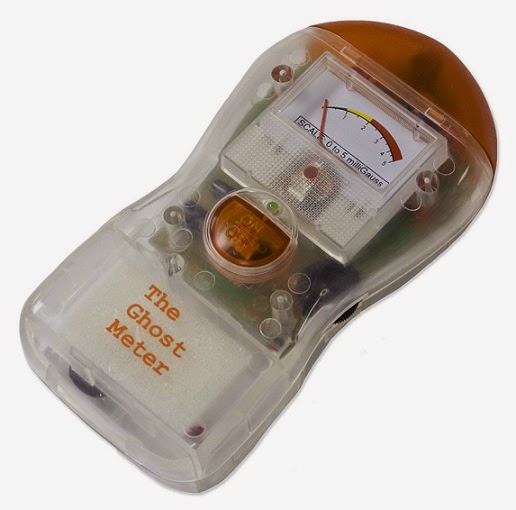 Now this isn't really my thing, but the subject of ghosts is often interesting and intriguing in its own right. This isn't just a hobby for commoners with fantastical imaginations, either, as even people with somewhat notable scientific titles have been researching and conducting experiments in certain "haunted" areas for many years. The paranormal experiments usually involve some high-tech equipment, recording devices, EMF sensors and whatnot.

The Ghost Meter found on this post, looks more like a cute version of something that could be used for various spooky experiments. The reviews vary but, if anything, it can at least find electrical wiring behind walls or detect high readings from power outlets; ha-ha! But seriously, if you are a hardcore ghost tracker, you may want to spend a bit more money and buy a more expensive, high-tech EMF sensor. The one shown here is under 40 dollars, and once the batteries are drained a little bit, the accuracy will most likely go way down.

Anyway, this particular ghost meter claims to be a bargain and that it can outperform many of the more pricey models. It has been calibrated to ignore the extremely subtle EMF emissions surrounding the human body, but it is suppose to be sensitive enough to detect the EMF energy fluctuations that are commonly found at notoriously haunted locations. It has all the primary functions of what you'd expect from a quality EMF meter, plus you get the little label on it that says "Ghost Meter." Is this just another sales gimmick or is it a true ghostly deal? LOL!

I started to include a picture of a book entitled "The Ghost Hunter's Field Guide," which is over 400 pages long and provides information and locations for over 1,000 places that are supposedly haunted in the U.S. If you combine the EMF sensor (along with a bit more gear/equipment) and that Ghost Hunter's book, you are sure to have some interesting road trips, depending on how much free time you have on your hands. ...Boo!