ZPE - Limitless (free) energy embedded in the fabric of space? 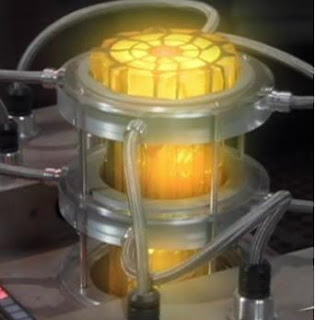 The concepts, theories and hypothetical notions of ZPE (Zero Point Energy) being a magnificent alternative energy source that could change the world as we know it, has been around for quite some time, regardless of how far-fetched it may seem to the masses.

Instead of wasting time going over the basic concepts of Zero Point Energy, I'll skip right along and assume that anybody that comments on this page, has at least some idea of the subject matter. If you are truly lost and behind the times, there are many books and, if you have trouble reading, there are several YouTube videos about ZPE that may be helpful for getting you towards the on-ramp of ZPE fantasy - fact or fiction, you decide. Where was I? Oh, the far-fetched notions...

Uh, well, today's physics might allow this once-considered far-fetched notion of tapping into the limitless quantities of energy that are embedded in the fabric of space... While using two theoretical areas of modern physics: the theories of ZPE that model the vacuum of space that contain actual energetic fluctuations of electric field energy along with the theories of system self-organization, this thing may be possible. Well, of course it is possible, as there have already been a few free-running devices/inventions that have been suppressed by ___, to say the least.

[Occasionally, throughout this post, there will be reference notes, noted within brackets. At the end of this entry, I will list the references used.]

At any rate, one may ask, how can random fluctuations become coherent? Well, let's not talk about violating the second law of thermodynamics, as this point has been thoroughly discussed in the theories of system self-organization [1, 2]. Prigogine won the 1977 Nobel prize in chemistry for defining the conditions that a system could evolve from randomness toward coherence.

As for the fabric of space and/or tapping into the endless, limitless energy of the ether, I've seen many debates over this. There are some scientists and various Internet trolls, for example, that preach this empty space nonsense and how space doesn't exist, only objects exist, blah, blah, as it helps their curious, but ignorant, brains sleep better at night. I used to call those beliefs the "dead rock religion," but since I never believed in talking rocks, the object/concept religion was never for me. But yeah, it is so much easier to examine and dismiss everything as if we are merely dealing with circles, squares, triangles or the letters from the alphabet (sort of like Kindergarten), as opposed to admitting that we have so much more to learn about the world and the cosmos that surrounds us, so please excuse the narrow-minded views from the many stagnant scientists and online critics out there...

Anyway, if space doesn't exist and atoms are composed mostly of empty space, then how can anything exist without space? Well, this indirectly relates to ZPE and all that quantum stuff, like quantum foam, quantum mechanics or whatever you want to call it. Side Note: This quantum crap really screws-up a lot of concepts for the non-scientific laymen people. It is like some of these folks can just slap the word 'quantum' in front of anything and presto, we have some marvelous knowledge at hand, so please excuse my disgust for these inane names & titles for such things. A non-related example of such confusion is the concept/term "black hole," as there is no 'hole' about it.

Okay, well, now we come to the implications of hyperspace and/or the fabric of space/time/ether, whatever... If the existence of a physical hyperspace appears bizarre, there seems to be an even bigger paradigm shift in store for humanity arising from the conclusions of physicists exploring the foundational issues of quantum mechanics [3]. There is both theoretical and experimental recognition of instantaneous connectivity between distant elementary particles that are "quantum entangled" due to a previous interaction [4]. Yes, there's that word again, quantum. However, I have seen some really interesting videos about quantum entanglement; some people even relate the concept of quantum entanglement to certain aspects of Buddhism, but that's a totally different subject.

Anyway, many foundational physics are suggesting either a non-local connecting mechanism existing outside of space-time [5] or a possibility of parallel 3-D universes [6]. Then you'll hear many state that time does not actually exist and is merely a partial perception of our limited consciousness slicing a 4th spatial dimension. Going by what I have read, it seems that many of the foundational physicists are heading toward the philosophical model of Ouspensky's "Tertium Organum" [7], a work first published in 1912, which was 20 years prior to the discovery of quantum mechanics. Ouspensky emphasized that 1 extra spatial dimension is all that is required to embed an infinite number of 3D universes. With that being said, the lonely notion that the fabric of space might be embedded with limitless free energy (ZPE) that could be extremely useful for mankind, is a small paradigm shift when compared to the implications of non-local connections and the illusionary existence of time.

As many of us are aware, a scientific paradigm shift cannot be created by mere theoretical discussions. Even with the proper experiments, such things are often ignored and ridiculed, to say the least; take cold fusion experiments, for example. Then, there is the big stopper/blocker effect, which is when a certain technology doesn't work in harmony with political and economical interests, etc., along with other factors, and then that is when advanced, helpful inventions often get suppressed.

We need a massive replication of such an invention at large; one that is simple, robust, and self-running. If the vacuum of space and/or the fabric of space is truly embedded with a limitless supply of free energy, such an invention will ultimately surface for all of mankind to see...

Do you believe that ZPE will be attainable for the human race? If so, will it eventually be used for interplanetary travel? Or is it just some fantastical idea that is fabricated by lunatics claiming to have alien implants without the microchips? Ha-ha!

We are surrounded by endless energy...


---End of Post "ZPE - Limitless (free) energy embedded in the fabric of space?"
Posted by Obscurely Diverse at 11:15 AM