Iridescent Clouds doesn't mean the 'End is Near' 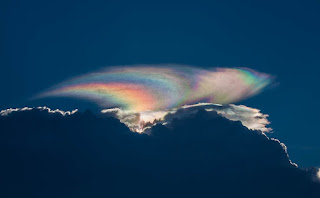 What would this planet be like without the constant "end of the world" propaganda from outspoken humans? I don't know.  Perhaps an unusual, unfamiliar place to dwell?  Ha-ha!  But seriously, "signs of the times" and/or the "end is near" proclamations have been around for countless centuries, I suppose.  Ever since man has been able to communicate with each other by way of various languages or whether it's via pictographs or even sign language, for example, doomsayers have always had their say.

With the freedom of speech and freestyle expressions out of the way, let's get on with these mysterious iridescent clouds, shall we? First of all, it is September of the year 2015.  For a magnitude of strange reasons, many folks are predicting that we are entering the 'End is Near' stage of our existence, uh, AGAIN!  It seems that every couple of years or so, a new theory about the end of the world surfaces.  I can't even count the amount of times I have heard and witnessed these false claims over the years, all to be wrong, as usual.  But let's clear one thing up real quick: If humans keep predicting the end of our human-populated world every single day for the rest of our existence on planet Earth, eventually we'll get it right.

At any rate, iridescent clouds doesn't mean in the slightest that the end is near.  Who in the hell comes up with this crap?  Nuclear wars, massive asteroid collisions, etc., all make sense, but some of these other wild & crazy theories of our demise doesn't add up - nor do they make any sense!

Anyway, this subject entered my cranium structure earlier today when I was reading the headline: 'Iridescent cloud' leaves people in Costa Rica fearing it's the end of the world.

Although it's somewhat rare, it is a natural weather phenomenon.  But during these crazy times of instant messaging/texts, instant video and image sharing, and social media hype, word spreads rather quickly when certain people ~feel~ that the end of the world is fast approaching!  Plus, this is September of 2015, like I mentioned earlier, so there has already been enough hoopla & ballyhoo about how the end is near.  I've heard of several things this month ranging from Armageddon, Wave X Awakening, Full Disclosure of Alien Visitations, Worldwide Grid Collapse (click here for wind turbines for your home), Massive Asteroid to Destroy Earth, Nibiru / Planet X Conspiracy, to the Pope (supposedly affecting something?) and the Last of the Blood Red Moons to signal that the end is near.  I mean, holy crap!  LOL!

I guess I have rambled on about everything surrounding this topic except for the actual science behind iridescent clouds.  With that being said, I will simply supply a couple of informative links for such things and simply wrap this post up.  Hopefully the planet will be around for at least a few more years, so we can share some more of these creative 'end of the world' scenarios; cheers!

For more information on this subject, go here:
* http://chestofbooks.com/crafts/scientific-american/sup5/On-The-Cause-Of-Iridescence-In-Clouds.html#.Vfx0aZiFOzc
* https://en.wikipedia.org/wiki/Cloud_iridescence

---End of Post "Iridescent Clouds doesn't mean the 'End is Near'"
Posted by Obscurely Diverse at 2:05 PM