Do they make bicycle-based generators? 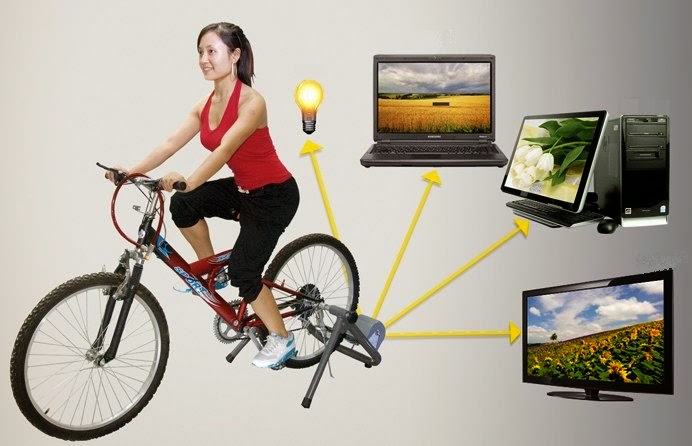 I've wondered about this before, but I rarely give it much thought anymore. I think the last time I got reminded of this concept, except for today, was when I last watched the sci-fi flick "Soylent Green." Many of you may not be aware of that movie, since it is fairly old. In a thumbnail, it involved a collapsed society and a government that resorted to feeding the people with something they called Soylent Green. This green stuff was composed of dead humans, albeit there has got to be better ways to recycle dead bodies. Anyway, when some of the people found out about this, all hell broke loose and Charlton Heston was on the move, as usual - with or without his famous empty laugh, it doesn't matter. Anyway, there was some old guy on there that played his father in that film, and during the movie it showed him on a bicycle-based generator setup. Basically, the lights started getting dim in the house and he would pedal away to generate the electricity needed to power the primary electrical devices like light bulbs, etc.

Anyway, the concept is rather simple. Sort of like a rat in a cage turning a wheel to generate electricity, but I think it would be really neat if they sold bicycle-based generators in a rampant fashion. A lot of the people would get some much needed exercise along with feeling more like they are earning their keep by generating some free electricity that is driven by human input/effort. I mean, even if it only amounts to powering a few light bulbs, would it not be cool to exercise and produce electricity for your home all at the same time? I think that notion would not only be enough to motivate the ones that are on the fence of laziness, but would also motivate the ones that are on the verge of buying an exercise bike or treadmill, for example. Anyway, it was just a thought... I'd market this product and/or promote it, if it was in my inventory, just saying...

---End of Post "Do they make bicycle-based generators?"
Posted by Obscurely Diverse at 11:24 AM